Pet Care on a Budget

Since we love our four-legged friends and treat them just like family, we even dress them up and buy them presents like our beloved two-legged children. Therefore, they’re worthy of a few more dollars when it comes to their diet.

But as consumers, sometimes it’s difficult to know exactly what we’re purchasing nowadays, especially when it comes to pet food. While we don’t want to buy the super-cheap varieties that are full of preservatives, byproducts and other unhealthy ingredients, at the same time we don’t want to overspend on healthier options.

But it begs the question, what exactly are byproducts and why are they so harmful to animals? What other ingredients in traditional pet foods are dangerous?

Byproducts, by definition, are really two-fold, meat and poultry, whose real ingredients are less than pleasant. According to Pet Food Advisor, the pet food producers themselves define them as: 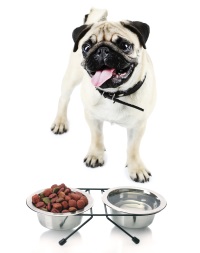 Basically, byproducts are slaughterhouse waste, with the exception of things like hair, horns and hooves, they can be almost anything. As responsible pet owners, we train our animals to stay out of the garbage, so why would be intentionally feed it to them?

If you read labels, in many varieties of inexpensive retail pet foods, you may see corn or corn meal as the main ingredient. Just like the byproducts mentioned previously, it doesn’t necessarily mean the actual food portion of this grain. It could be ground up cobs, portions of the husk, stems, leaves and other waste products - not the kernels themselves.

These unhealthy ingredients can cause a variety of health problems for dogs including digestive issues and allergies. Corn and other grains are not fully digestible by animals and therefore aren’t nutritious for them to consume.

Another problem with grains is the possibility of the presence of mycotoxins, a form of mold that can occur naturally, which can sicken or even kill some animals. As a matter of fact, a class action lawsuit was filed against Purina earlier this year in relationship with this dangerous ingredient allegedly found in their Beneful brand of dog food.

Because byproducts and corn are cheap, that’s why. It’s that simple. The producers of most big retail pet foods are in the business of making money and not concerned with keeping our pets healthy.

The bottom line is, if we spend a little more now, we’re going to spend a lot less down the road on expensive veterinary bills which will give us extra spending cash for us pet lover’s gifts. Feed your pets nutritious, all natural food and they’ll not only be healthier and happier, they’ll be around a lot longer for us to enjoy their precious company.

NaturalPetWarehouse.com provides a huge selection of freeze-dried and dehydrated dog foods at great prices. Thank you Amber Kingsley for writing this article to educate pet owners about pet food and treat nutrition.

Stay up to date with our latest promotions, news and more.